Green Belt of the West

I was once told during a biology class that research has found fewer insects living in the West zone in Singapore compared to the rest of the island. The reasons? It was not clear cut, but the implied cause is the less than desirable air quality in the west due to the concentration of industrial operations there.

That little fact stuck to my mind because I was living in the West then.

Since then I realized that to mitigate the over-industrialization, the urban planners have put in something I would call a greenbelt…..

And one of that is a little secret tucked away in the West coast area, not many Singaporeans know about. There is a reservoir bordering Teban and Pandan gardens, near the Penjuru industrial area. Many can be seen jogging, brisk walking and strolling during dusk. 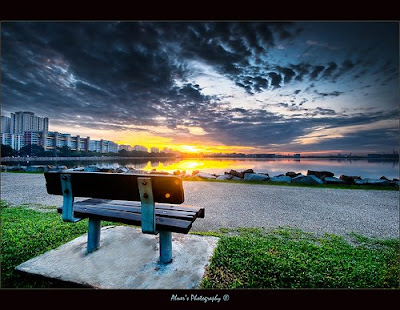 Pandan Reservoir with the flats to the left
Source: Alner

For residents of the flats fronting the reservoir, they can overlook the reservoir with its clear blue sky but unfortunately, there are several chimneys spewing fire and smoke in the background. Not exactly a pretty sight…. but definitely different!

Anyway, these are the incinerating chimneys from the nearby incinerator plant (I think they burn the waste). It is a simple laid back atmosphere there, no fancy amenities, maybe just a few benches scattered over.

But you will be surprised by the ecological system that can be discovered there. There are white birds that are quite large mind you (I don’t really know their names) that would fly past, and occasionally even swoop down for a quick dip in the reservoir. I think they are thirsty 🙂 You can also occasionally spot them resting on the rocks surrounding the water. They have long necks and look a bit like cranes…

The best part of this reservoir is that you can walk down on the rocks to the water edge (carefully tho), and watch the fishes bobbing up and down. You can touch the water if you want to. Not many reservoirs allow such close contact with nature here. I am quite sure there are some ardent angler who would attempt to catch the fishes…

So you can either park at any one of the flats along the reservoir, or alight at the bus-stop infront of Block 31 Teban Gardens. Cross the one-lane road, walk up a small flight of steps and there you have it – the reservoir right in front of you.

With the reservoir in front of you, turn left and start brisk walking as warm up. Once you walked past the block of flats along West Coast road, you arrive at a quiet stretch where there is a storage and launching pad for canoes. There are sometimes canoe teams practising, and I would also jog on the spot during my warm-up to watch if there are people training.

After that, you jogged past the factories that line the other side of the reservoir. Go round the bend and its really quite a soothing and easy run. I like going the full round, and slowing down as I make the last bend returning to the West Coast stretch, and enjoy cooling down by strolling near the water edge and observing the changing hues of the evening clouds.

Once, when I was on one of my jogs, a Chinese guy came up to me and asked if I was training for a marathon or competition as I seemed to be training so hard. I said “no”, and he was puzzled as he thought it was odd to be running so hard just for fun!

Hahahaa… I know, it’s hard to explain to non-runners. The adrenaline rush, and what some call the “runner’s high” can be addictive! I just luv it !