The Bedok Jetty
The most non eye-catching stretch of the park has to be the Bedok jetty where anglers make a beeline for.

There are old bus-stop shelters mysteriously dotting the jetty. It is a weird sight because bus-stops are normally found along roads. I have always wondered why they are there. Maybe someone from the transport authority had a spark of inspiration and rescued the old bus-stop shelters and moved them to the jetty for a “second career”.

No matter why they are there – they do provide much welcomed shelter from the sweltering heat during the day.

Aspiring anglers come and plonk down their fishing necessities and sometimes, these include a few creature comforts such as tents, radio, even tiny mobile TV… and of course a pail of water to hold any potential big catch … 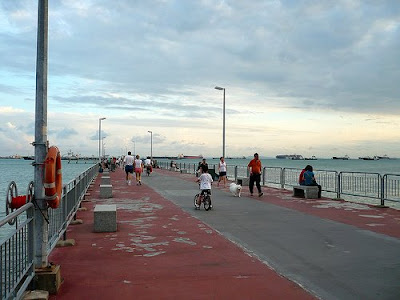 Joggers, roller-blade riders, cyclists all stop at the jetty to see if the anglers caught anything, and…

… for the great view of the city. At the jetty, one can catch the sun setting over the city skyline. Awesome sight! One can also watch the planes flying really close to land at the Singapore Changi International Airport. 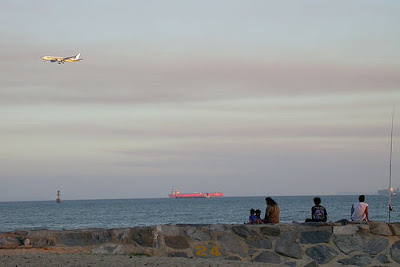 a plane flying overhead while people sit around and fish
Source: besar bears

And if you are lucky, you may chance upon someone who finally hit pay dirt – well, not exactly dirt, usually a small to medium-sized fish. I have actually seen an angler who caught quite a large one and she was hawking it on the spot! Well, it most likely ended up on someone’s dinner plate.

For those who enjoy water sports, East Coast Park spots the only cable ski park in Singapore. Skiers are not pulled by a boat but by an overhead cable, similar to a snow ski lift except it is erected around the water edge. The cables runs counter clockwise around the water edge and you are hooked up to the cable while it’s on the move. It can accommodate up to 8 skiers or wake-boarders.

At first glance, it looked like a merry go round. It looks easy but I know it is not. I tried wake-boarding once (on a real boat) and I was not going to make a fool out of myself again attempting one of these rides. I have seen too many fall even before they could leave the starting point.

Watching is enough for me … from a comfortable distance, especially if it is from a cafe by the water.

The cable supposedly travels at the same speed as the boat in tournament waterskiing and wakeboarding, maintaining a speed between 20 – 58 kph. In other words, the organizer is trying to say that skiing at the cable ski park is no different from skiing in the open water, just cheaper.

The obvious advantage to cableskiing is the dramatic reduction in the cost for the individual skier. Or if you just want to enjoy the views and the people, just sit back and let the cool sea breeze and the sounds of the waves ease your troubles away.

The cable ski park is not restricted to wakeboarding and waterskiing. One can also try trick ski, kneeboard, or even surf without the wave. But I have not seen those yet.

The old place brings back loads of childhood memories for me and my family. I spent many a weekend sliding down the water slides, and hanging loose in a huge tyre float drifting down the convoluted water routes. Then having a picnic on the deck chairs, munching on granny’s yummy curry chicken and French loaves!

This place held such fond memories that I was elated when I heard news that it will be reopened!

But it was a deep disappointment when I realized it will not be restored as a water theme park as it was deemed not economically viable! It has been transformed into a young and sporty lifestyle hub for the young and young at heart instead. Attractions include a wide range of premium wine-and-dine outlets and various sporting goods rental outlets. There is also a childcare centre and playground for kids.

One eating place to try is the Old Town Cafe. They serve the famous Malaysia’s White Coffee, as well as a drink concoction comprising both coffee and tea. Don’t forget to try their yummilicious Ipoh Hor Fun!

I grew up playing in the old water park, it will now be a place that hold a different set of memories for these children in the future.